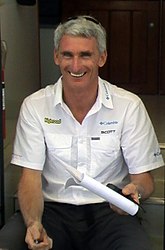 He began cycling at 12 years of age, competing on both road and track, with success. Selected for the Australian team, at the 1977 Junior World Championships in Vienna, Austria. The 16 year old Peiper, then went to race in Belgium. He stayed for the next three years. Winning races, as a junior, then amateur, hardened a mindset & reputation, that remains to this day. Intense racing and travelling, eventually, took its toll on his health. In late 1979, following an illness, he returned to Australia, to recover. He didn't race again, until late 1980.

A key figure in Peiper's recovery, and return to top level racing, was Peter Brotherton a former British Olympic cyclist (he settled in Melbourne, after the 1956 Summer Olympics) who was building frames & helping riders with training advice. A highly successful return to racing in 1981, winning often, and the Dulux Tour of New Zealand, gave Peiper, the chance to return to Europe in 1982, with the ACBB amateur team, based in Paris, France.

The 1982 season with ACBB was successful. Winning 14 races, amateur classics, and the prestigious Grand Prix des Nations TT. This earned him a professional contract with Peugeot for 1983. In 10 years, he rode the Tour de France five times, the Giro d'Italia four times & the Vuelta a España once (10 Grand Tours). In his career, Peiper raced with 3 Professional Cycling teams: Peugeot, Panasonic and Tulip Computers, winning more than 35 races, including stages of the Tour de France and the Giro d'Italia. Allan now resides in Belgium. After six years working with BMC Racing Team, the team disbanded at the end of the 2018 season. In 2019, Allan, will be working with UAE Team Emirates as Lead DS.