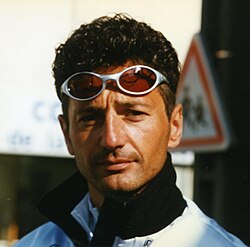 Flavio Vanzella (born 4 March 1964) is a former Italian professional road bicycle racer. He was professional in 1989 to 1998. He won 3 victories. In the 1994 Tour de France he wore the yellow jersey for 2 days. Other victories included a stage win in the Euskal Bizikleta, a stage win in the 1995 Tour de Suisse and the Giro del Veneto. He also competed in the team time trial at the 1988 Summer Olympics.