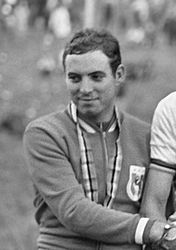 Guyot made his debut in 1965, finishing in second place in the one-day race Paris-Troyes. Then he participated three times in the Tour de l'Avenir, where in 1967 he won two stages and finished eleventh overall. The same year he won a silver medal in the amateur road race at the 1967 UCI Road World Championships.

In 1968 he turned professional and won one-day races in Auxerre, Saint-Raphael and Tréguier. Next year he won a one-day race in Pleneut, only to retire from cycling in 1970.