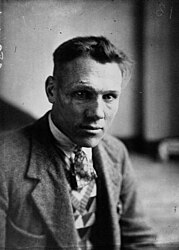 Julien Vervaecke (3 November 1899 — May 1940) was a Belgian professional road bicycle racer. He won Paris–Roubaix, Paris–Brussels, 2 stages in the Tour de France and finished 3rd in the 1927 Tour de France. At the start of the Second World War, when an English army detachment wanted to take his house, he refused, and was shot. His body was found weeks later, so the exact date of his death is not known.