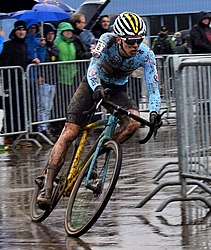 Thibau Nys (born 12 November 2002) is a Belgian cyclist, who competes in cyclo-cross and road cycling. Nys is the son of Sven Nys, one of the most successful cyclo-cross riders of all time.

Nys has followed in his father's footsteps and has started cyclo-cross from an early age on. He has already obtained three Belgian and one European cyclo-cross title in the youth categories. On 2 February 2020, he won the men's junior title at the 2020 UCI Cyclo-cross World Championships. On 11 September 2021, he added the men's U23 European Road Race Championships in Trento.