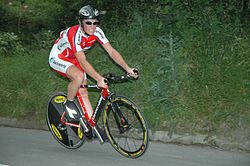 James Lewis Perry (born 19 November 1979 in Cape Town) is a South African former professional road cyclist. Perry has previously ridden for the UCI Professional Continental team Barloworld until the team's demise. In 2001 he won a bronze medal at the World Under 23 Time Trial Championship. He has been a professional since 2002. He won the Time Trial at the South African Championships in 2002, and also came second in 2007.

He also won the Grand Prix Möbel Alvisse in 2005, while riding for the Konica Minolta team.