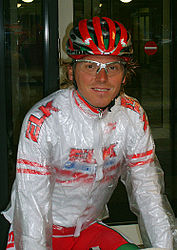 Christian Pfannberger (born 9 December 1979) is an Austrian former professional road racing cyclist. He was a two-time Austrian national road-race champion (2007 and 2008). Other achievements included winning the U23 National Championship in 2001 and the Giro del Capo, a stage race in South Africa in 2008. In spring 2008 he had top 10 finishes in all three of the Ardennes classics. Pfannberger was handed a lifetime ban by the Austrian National Anti-Doping Agency for his second doping violation.