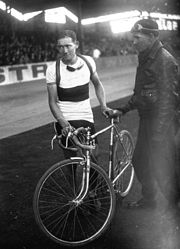 In the 1934 Tour de France, Vietto, a relative unknown, got wings on the mountains. This was not a surprise, because he had won the Grand Prix Wolber. He was prepared for the Alps and won easily on the steepest terrain. After he won the two major Alpine stages, journalists reported that this 'boy' could be the purest mountain climber that France knew.

During the 1934 Tour, he was poised to be race leader after his team leader Antonin Magne crashed during stage 16. Vietto was unaware of Magne's situation; his advantage gave him the virtual race lead. A marshal on a motorcycle caught Vietto to inform him his captain was on the side of the road, with team-mate Lapébie ahead, and the other team-mates behind the yellow jersey. Vietto turned and rode back up the mountain into the descending riders (at the time, reversing course was legal, but is no longer so), to give Magne his bike. Magne mounted Vietto's bike and with Lapébie closed the gap to preserve his overall lead and win the Tour. A photograph shows Vietto sitting on a stone wall as the race passes.

This made him a star in France. The image of a 20-year-old who sacrificed his chance of winning the Tour doubled his popularity. Vietto was nevertheless named the Tour's best climber; he finished 5th overall, almost 1 hour behind Magne. Vietto never won the Tour. He was closest in 1939, when he gained the yellow jersey in Lorient in one of the first stages, but in the mountains, once his favorite place, he was left by Sylvère Maes. After that Tour, war broke out and the race wasn't held until 1947. Vietto, still loved, attacked from the second stage. As a result, he took the yellow jersey in Brussels, to lose it two days before the finish, in a time trial of 139 km.

Vietto lost a toe to sepsis in 1947. Legend has it that Vietto insisted his domestique, Apo Lazarides, cut off one of his own toes to match. According to legend, Vietto's toe is in formaldehyde in a bar in Marseilles.