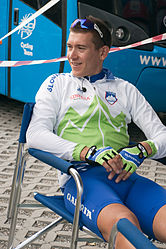 Kristjan Fajt (born 7 May 1982) is a Slovenian racing cyclist, who last rode for UCI Continental team Adria Mobil. His only professional win to date came at the 2008 Tour of Qinghai Lake. He rode for Slovenia at the 2014 UCI Road World Championships.

In March 2016, Fajt recorded a positive test for erythropoietin (EPO) at the Istrian Spring Trophy. He was later given a 45-month ban in October 2016 backdated to March, with his ban expiring in January 2020.