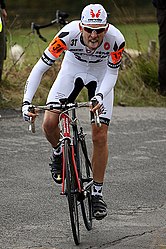 Daniel Christopher Fleeman (born 3 October 1982) is an English former racing cyclist, who rode as a professional between 2007 and 2011. He competed in the Under-23 road race at the 2004 UCI Road World Championships in Verona, Italy. In 2009 he was a member of the Cervélo TestTeam. He won the Tour des Pyrenées in 2008 with An Post–M.Donnelly–Grant Thornton–Sean Kelly. He first retired after the 2011 season.

After retiring from road racing Fleeman competed as an Elite mountain bike rider in the national XC series, riding in 2012 as an independent whilst developing his coaching business Dig Deep Coaching, and establishing his own team, Dig Deep Coaching-Pactimo-Cannondale, for 2013. Fleeman returned to the roads in 2014, and subsequently joined Metaltek Kuota, winning the Rutland – Melton International CiCLE Classic in 2017.