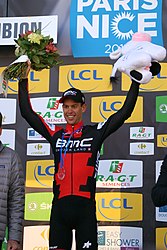 In his first year at UCI ProTour level, Porte won the young rider classification at the 2010 Giro d'Italia, and featured prominently in the general classification at several stage races. Porte moved to Team Sky for the 2012 season, and quickly made an impact, winning the Volta ao Algarve. In 2013, Porte achieved his biggest victory to date, winning two stages and the overall classification in Paris–Nice. He served as a super-domestique for three Team Sky Tour de France victories: Bradley Wiggins in 2012 and Chris Froome in 2013 and 2015.

In 2015, after winning the Australian National Time Trial Championships, Porte won two stages as well as the final overall classification of Paris–Nice, winning that race for the second time in three years and ending up atop the UCI world road cycling rankings.