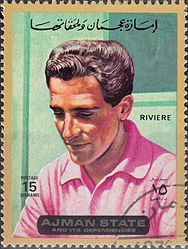 Rivière, a time trialist, all-around talent on the road, and a three-time world pursuit champion on the track, lost his career to injury. He was considered to have a chance of winning the 1960 Tour de France but crashed on the Col de Perjuret descent of Mont Aigoual in the Massif Central while following leader Gastone Nencini. Rivière hit a guard-block on the edge of the road, falling 20 meters into a ravine. He landed in brush, breaking two vertebrae.