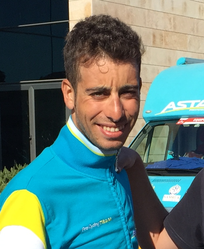 Fabio Aru (born 3 July 1990) is an Italian former professional road bicycle racer, who rode professionally between 2012 and 2021 for the Astana, UAE Team Emirates and Team Qhubeka NextHash squads. He hails from San Gavino Monreale in Sardinia, and is known for his climbing ability, which made him a favorite for the Grand Tours. He is known as "The Knight of the four Moors", a reference to his native island of Sardinia.