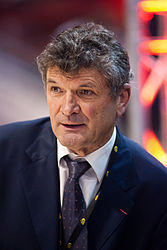 Bernard Thévenet (French pronunciation: ​[bɛʁ.naʁ te.və.nɛ]; born 10 January 1948) is a retired French bicycle racer. His sporting career began with ACBB Paris. He is a two-time winner of the Tour de France and known for ending the reign of five-time Tour champion Eddy Merckx, though both feats are tarnished by Thévenet's later admission of steroids use during his career. He also won the Dauphiné Libéré in 1975 and 1976.