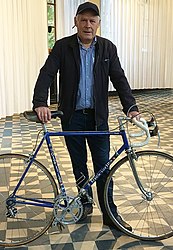 Johan De Muynck (born 30 May 1948 in Sleidinge, East Flanders) is a Belgian former professional road racing cyclist who raced from 1971 to 1983. The highlight of his career was his overall win in the 1978 Giro d'Italia. He was an outstanding climber. Other Grand Tour highlights include a very strong performance in the closely contested 1976 Giro d'Italia where he held the Maglia Rosa until the final time trial finishing on the podium in 2nd just nineteen seconds behind Felice Gimondi. He also rode well in the 1980 and 1981 editions of the Tour de France where he finished 4th and 7th respectively. Going into the 2022 cycling season De Muynck is the last Belgian rider to win a Grand Tour.