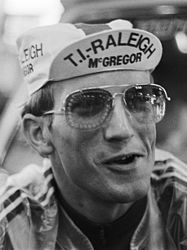 Jan Raas (born 8 November 1952) is a Dutch former professional cyclist whose 115 wins include the 1979 World Road Race Championship in Valkenburg, he also won the Tour of Flanders in 1979 and 1983, Paris–Roubaix in 1982 and Milan–San Remo in 1977. He won ten stages in the Tour de France. In six starts, Raas won the Amstel Gold Race five times. In his entire career he competed in 23 of the highly contested "Monument" Races and he finished on the podium in almost half of them: 3rd place six times, 2nd place zero times, and 1st place four times.

Raas was a tactician and clever sprinter. He struggled on the long steep climbs but excelled on the short climbs characteristic of the northern classics.