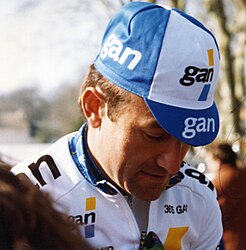 Gilbert Duclos-Lassalle (born 25 August 1954) is a former French professional road racing cyclist who was a specialist at one-day classic cycling races. He raced from 1977 to 1995, one of the best French riders of a generation that included Bernard Hinault and Laurent Fignon.

Born in Lembeye, Duclos-Lassalle was a specialist of Paris–Roubaix, but it took "Duclos", as the public called him, a long time to win. After finishing second to Francesco Moser in 1980 and Hennie Kuiper in 83, he won in 1992, finishing on Roubaix Velodrome 20 seconds ahead the German Olaf Ludwig.

Duclos-Lassalle was 37 years old. But the next year he won again, beating the Italian Franco Ballerini on the line. Ballerini, who thought he won, lifted his arms in triumph after the line but had been beaten by Duclos-Lassalle in a very close finish.

Not a climber, Duclos-Lassalle was never a contender for the Tour de France but he rode well in one-week races such as Paris–Nice or the Critérium du Midi Libre.

A cobbled secteur used in Paris-Roubaix between Wallers and Hélesmes was officially named "Pont Gibus" in tribute to Duclos-Lassalle in time for the 2013 edition of the race. This is the second of the race's cobbled sections to be named after him: the secteur between Cysoing and Bourghelles is known as the "Pavé Gilbert Duclos-Lassalle".

His son Hervé Duclos-Lassalle is also a professional cyclist.

Gilbert Duclos-Lasalle has worked since retirement as a television commentator.