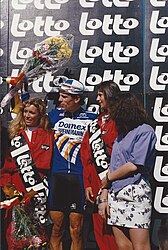 Thomas Wegmüller (born 28 September 1960) is a former Swiss racing cyclist. He rode in the Tour de France, the Vuelta a España, won a stage in the 1989 Critérium du Dauphiné Libéré and was named the Most Combative rider on the Champs Elysees stage during the 1990 Tour de France. He was the Swiss National Road Race champion in 1992.