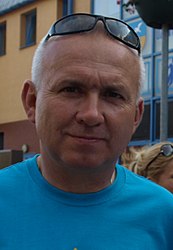 Lech Piasecki (born 13 November 1961) is a Polish former racing cyclist. Born in Poznań, he became the first Polish cyclist to wear the yellow jersey in the Tour de France, in 1987.

After Piasecki became Amateur world champion in 1985, the Colnago team wanted to sign him. The Polish cycling organisation allowed that in exchange for bicycles. His first victory as a professional cyclist was in a time trial in the 1986 Giro d'Italia, where he surprisingly beat many favourites. In 1987, he won the first stage of the Tirreno–Adriatico. It was a time trial in which he started early, and the wind changed direction after Piasecki finished, so the main favourites who started later had a disadvantage. In the 1987 Tour de France, Piasecki became second in the prologue, and took the yellow jersey in the team time trial. After he lost the lead, he had to abandon in the 7th stage due to an illness. On August 24, 1988 he became World Track Champion in individual pursuit. The following year Piasecki put forth a remarkable performance during the 1989 Giro d'Italia by winning three stages including two ITT stages, as well as a high mountain stage.