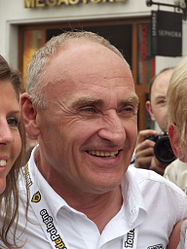 Czesław Lang (born 17 May 1955 in Kołczygłowy) is a Polish former road racing cyclist.

He competed for Poland at the 1976 Summer Olympics in Montreal and the 1980 Summer Olympics held in Moscow, Soviet Union in the individual road race, where he finished in second place.

Since 1993, he has been the Director of the Tour de Pologne.