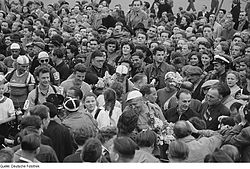 John "Ian" Steel (28 December 1928 – 20 October 2015) was a Scottish racing cyclist who in 1952 won the Peace Race, a central European race between Warsaw, Berlin and Prague. He was the only Briton, and the only rider from the English-speaking world to win it, as well as the first Briton to win any major race. He also won the Tour of Britain as a semi-professional and was at one stage second in the 1952 Tour of Mexico before crashing.