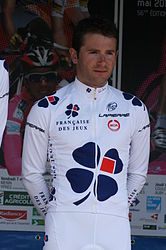 Pierre Cazaux (born 7 June 1984) is a French former road cyclist. Cazaux had previously competed as a professional for the Française des Jeux and Euskaltel–Euskadi teams; he became the third non-Spanish rider to ride for Euskaltel–Euskadi, being eligible because of his birth in the French Basque Country.