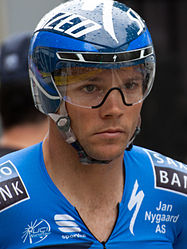 During his career, Cantwell won a stage of the Herald Sun Tour, and two stages of the Tour de Taiwan. In 2011, he won the Australian National Criterium Championships.