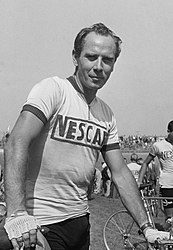 Hugo Koblet (pronounced [ˈhuːɡo ˈkoːblɛt]; 21 March 1925 – 6 November 1964) was a Swiss champion cyclist. He won the Tour de France and the Giro d'Italia as well as competing in six-day and pursuit races on the track. He won 70 races as a professional. He died in a car accident amid speculation that he had committed suicide.