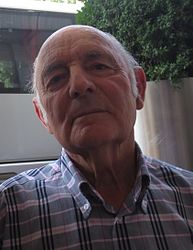 Gilbert Bauvin (born 4 August 1927 in Lunéville, Meurthe-et-Moselle) is a former professional French road bicycle racer. He was a professional from 1950 to 1960. The highlights of his career include winning the Paris–Camembert in 1954 and Tour de Romandie in 1958 and winning four stages in the Tour de France as well as wearing the yellow jersey for a total of four days. His best grand tour result was the 1956 Tour de France, where he finished second after surprise winner Roger Walkowiak.