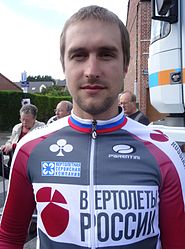 Ivan Alexandrovich Savitskiy (Russian: Иван Александрович Савицкий; born 6 March 1992 in Grozny) is a Russian former professional cyclist, who rode professionally between 2012 and 2017 for the Russian Helicopters and Gazprom–RusVelo teams. On the track he represented the national team. He competed in the scratch event at the 2012 UCI Track Cycling World Championships. He was named in the start list for the 2016 Giro d'Italia.