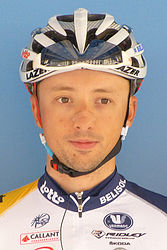 Born in Neerpelt, Vanendert has been competing as a professional since the start of the 2012 season, joining Lotto–Belisol from Italian amateur squad UC Pistoiese Cecchi Logistica. Vanendert made his Grand Tour début at the 2012 Giro d'Italia, as one of three new professionals alongside Gaëtan Bille and Brian Bulgaç. During the eighteenth stage, Vanendert was part of the bunch sprint, and eventually finished in tenth place.