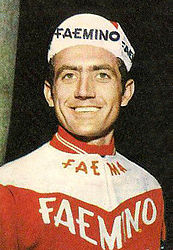 Zilioli lives in the province of Cuneo (Piedmont) and is responsible for the stage starts for Giro d'Italia.