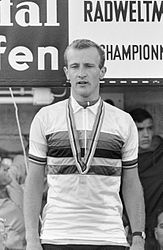 Evert "Eef" Gerardus Dolman (22 February 1946 – 12 May 1993) was a Dutch racing cyclist, who won the gold medal in the 100 km team trial at the 1964 Summer Olympics in Tokyo, Japan, alongside Gerben Karstens, Bart Zoet, and Jan Pieterse. His sporting career began with Apollo Rotterdam. He became Dutch champion in 1967 and 1968, but was later stripped of his 1967 title because of doping.

He said in an interview with the Dutch magazine Wielerrevue that his racing career had been undermined by drug-taking and what he described as the witch-hunt conducted in the first years of drug-testing in the 1960s.