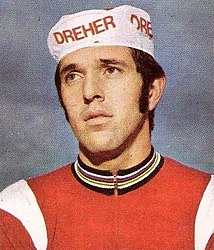 Roger De Vlaeminck (Dutch pronunciation: [ˈrɔʒe də ˈvlamɪŋk]; born 24 August 1947) is a Belgian former professional racing cyclist. He was described by Rik Van Looy as "The most talented and the only real classics rider of his generation". Nicknamed “The Gypsy” because he was born into a family of traveling clothiers, he is known for exploits in the cobbled classic Paris–Roubaix race, but his performances in other “Monument” races gave him a record that few can match. His record in Paris–Roubaix earned him another nickname, “Monsieur Paris–Roubaix” (English: “Mr. Paris–Roubaix“).