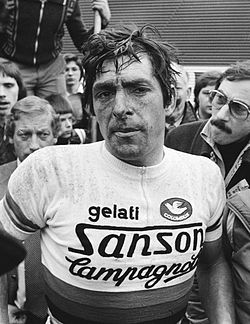 Francesco Moser (Italian pronunciation: [ˈmɔːzer] or [moˈzɛr]; German pronunciation: [ˈmoːzɐ]; born 19 June 1951), nicknamed "Lo sceriffo" (The sheriff), is an Italian former professional road bicycle racer. He finished on the podium of the Giro d'Italia six times including his win in the 1984 edition.

Moser was dominant from the mid-1970s to the early 1980s. He turned professional in 1973, showing a cultured pedaling style. But his powerful build meant he was not a gifted climber. He entered one edition of the Tour de France, in 1975, where he won two stages, held the Maillot Jaune for six days and finished 7th overall. He also won the 1977 world road racing championship in addition to collecting silver medals in 1976 and 1978. He won six times in three of the five monuments. Three editions of Paris-Roubaix, two victories in the Giro di Lombardia and one win in Milan-San Remo.

His 273 road victories puts him behind Eddy Merckx (525) and Rik Van Looy (379), but ahead of Rik Van Steenbergen (270) and Roger De Vlaeminck (255). He was also an accomplished track rider, riding up to six Six-Day races almost each winter throughout his career. He rode 35, 14 of which with René Pijnen, winning 15.

A nephew, Moreno Moser, (born 25 December 1990) is an Italian professional racer, and Francesco's son Ignazio Moser enjoyed success at the junior and amateur levels before retiring at the age of 22.