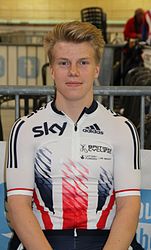 A former member of the British Cycling Olympic Academy Programme, Gibson specialises in endurance and timed events and came 5th and 10th in the Junior Time Trial at the 2013 and 2014 UCI Road World Championships, respectively. Gibson was selected to represent Great Britain at the 2015 UCI Track Cycling World Championships and, at 18 years old, he was the youngest rider on the squad.