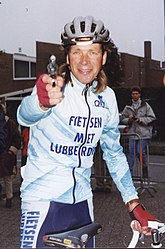 Henk Lubberding (born 4 August 1953 in Voorst) is a Dutch former professional road bicycle racer. He was a professional from 1977 to 1992.

As an amateur, he finished third in the 1976 Tour de l'Avenir. The following year he turned professional with the Dutch cycling team TI–Raleighof Peter Post. Lubberding stayed his entire career in teams directed by Post. In 1978, Lubberding was road race champion of the Netherlands and won a stage in the 1978 Tour de France, finishing eighth overall and best young rider. He was a good mountain climber despite being tall, and from the low lands of Holland.

Lubberding helped Jan Raas win the world championship in 1979. He also helped Joop Zoetemelk win the 1980 Tour de France. He won two more stages in the Tour de France and wore the yellow jersey as leader of the general classification in 1988.

Lubberding worked on his farm, even during his racing period.

He retired at the end of 1992 with 58 victories including Gent–Wevelgem.