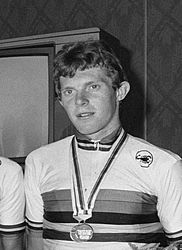 John Talen (born 18 January 1965) is a former road racing cyclist from the Netherlands, who was a professional from 1987 to 2000. As an amateur he won the world title in the 100 km team time trial, alongside Rob Harmeling, Tom Cordes and Gerrit de Vries, and finished second in the individual road race.

His biggest individual success as a pro was winning Dwars door Vlaanderen (1988) and the Scheldeprijs (1990). Talen rode in three editions of the Tour de France. In the 1994 Tour de France, he was last in the general classification, the lanterne rouge.