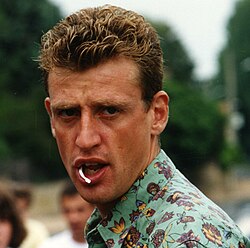 Francis Moreau (born 21 July 1965) is a French former professional racing cyclist from Saint-Quentin. He turned professional in 1989 and retired 12 years later at the end of 2000. A pursuit specialist, Moreau was a frequent medalist and the UCI Track Cycling World Championships, winning the pursuit in 1991. He was also part of the gold medal winning team at the 1996 Summer Olympics, who set a new Olympic record with a time of 4:05:930.