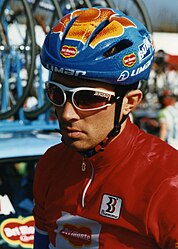 Armin Meier (born 3 November 1969) is a Swiss former cyclist. He was involved the Festina affair, and was part of the team that was disqualified from the 1998 Tour de France. Despite never testing positive for any drugs, he admitted to the use of EPO throughout his career. He was the Swiss National Road Race champion in 1996 and 1999. He also competed in the individual road race at the 1992 Summer Olympics.