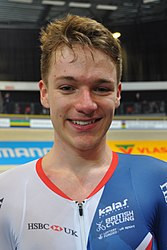 Hayter started riding at Herne Hill Velodrome in 2012, aged 13. He raced for the VC Londres cycling club from 2012 to 2016, and remains an honorary member. In 2016 he joined British Cycling's Senior Academy squad, giving up his A-level studies in maths, physics and chemistry in order to join the programme.

He rode in the men's team pursuit event at the 2018 UCI Track Cycling World Championships, winning a gold medal. In August 2018 it was reported that Hayter had joined Team Sky as a stagiaire until the end of the year. That month he also competed at the European Track Championships in Glasgow, where he took bronze medals as part of the British team pursuit squad, the Madison pairing alongside Oliver Wood and an individual gold in the omnium.

In November 2019, it was announced that Hayter would race for Team Ineos from 2020, on a three-year contract.