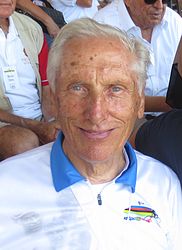 Vito Favero (21 October 1932 – 16 May 2014) was an Italian road racing cyclist. He was professional from 1956 to 1962. In the 1958 Tour de France, he finished second. Stage 14 of the 1958 Tour was won by Federico Bahamontes but Favero took over the Yellow Jersey. At that point he was already the 8th different rider to lead the race and he would hold his lead for four stages when Charly Gaul won stage 18 and Raphaël Géminiani took over as the 9th different rider to lead the race. Géminiani would hold the lead for three stages but in stage 21 Favero retook the lead as Gaul added another stage win. Favero would remain in Yellow for another two stages until Gaul won the final time trial and became the record setting eleventh rider to wear the Maillot Jaune in a single edition of the Tour.

The 1958 Tour de France has been compared to the 2006 Tour de France: Both Charly Gaul and Floyd Landis were favourites halfway the Tour, both lost dramatically at a stage, but at a later stage made a great comeback, which put them close to the two leaders (Favero-Raphaël Géminiani) and Óscar Pereiro-Carlos Sastre), and the day before the last stage to Paris they overtook the two leaders in an individual time trial.

Favero would also start the 1959 Tour de France, which he did not finish. During his impressive 1958 Tour he did not win any stages but he would win stage 2 of the 1959 Tour.