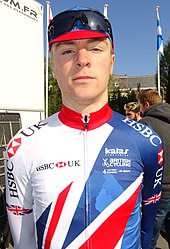 Originally from south east London, Wright moved to Manchester at the age of 18 to join the British Cycling Senior Academy, with a focus on the track. In August 2019, Wright joined UCI WorldTeam CCC Team as a stagiaire for the second half of the season.

In November 2019 it was announced that Wright was joining the Bahrain–Merida team, later renamed as Bahrain–McLaren for the 2020 season. He was recruited to the team by Rod Ellingworth, the outfit's general manager, who had previously worked for the British Cycling Senior Academy. In April 2020 Wright won stage four of the Giro d'Italia Virtual, held during the Covid-19 crisis that stopped outdoor cycling races. In October 2020, he was named in the startlist for the 2020 Vuelta a España. At the Vuelta he placed fourth on the fifteenth stage of the race.

As of 2021, Wright lived in Manchester, sharing a house with fellow racing cyclist Ethan Hayter.