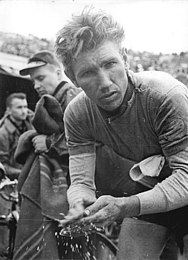 Anatoly Cherepovich (Ukrainian: Анатолій Черепович; 30 July 1936 – 2 August 1970) was a Ukrainian cyclist. He competed in the road race at the 1956 Summer Olympics and finished in 15th place individually and in sixth place with the Soviet team.

He retired around 1964 to coach the national team. He was killed on 2 August 1970 in a car accident. Two weeks later, Soviet Union won its first world title in the team time trial.