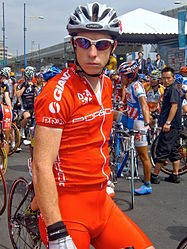 McDonald grew up in Armidale in country NSW. Both of his parents were school teachers. He worked as a school teacher in Darwin for a couple of years before returning to NSW where he began work as a bicycle courier in Sydney. A fellow courier introduced him to racing at Randwick Botany Cycling Club located at Heffron Park in Sydney's south east. Eventually he began to ride full-time for a number of smaller local teams. Coached by Adam Hogan of Cheeky Transport Bike shop he won Australia's Grafton-Inverell race, and won first National Road series win in Victoria at Bright. This led to riding for the Drapac Porsche team.