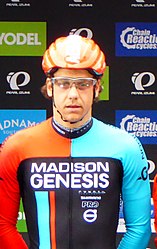 He started cycling for his local mountain bike club in his hometown of Peillon in 1997, riding in downhill mountain biking before switching to cross-country. He was a member of UCI ProTeam Cofidis and Continental teams Endura Racing and Team Raleigh. In November 2015 he was announced as a member of the Madison Genesis squad for 2016.