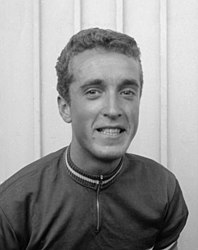 Albertus "Ab" Geldermans (born 17 March 1935, in Beverwijk) is a former Dutch professional road bicycle racer and directeur sportif. He was professional from 1959 to 1966 and rode seven editions of the Tour de France. In 1962 he finished fifth overall and wore the yellow jersey for two days. In 1960 Geldermans won Liège–Bastogne–Liège and won the Deutschland Tour. In 1962 he was Dutch road race champion. Afterwards he became directeur sportif of the Dutch national cycling team that competed in the 1967 Tour de France and directed Jan Janssen to victory in the 1967 Tour de France.