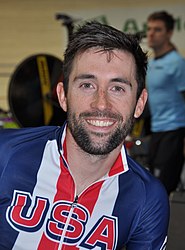 In 2015, Young won the second stage of the Tour of the Gila in a bunch sprint, beating Travis McCabe of Team SmartStop.