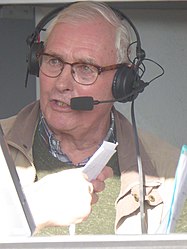 Vincent Denson (born 24 November 1935) is a former professional racing cyclist who rode the Tour de France, won a stage of the Giro d'Italia and won the Tour of Luxembourg in the 1960s.

He was a team-mate of Rik Van Looy and of Jacques Anquetil and, in the Tour de France, of Tom Simpson. He was the first British rider to win a stage of the Giro, before finishing 40th overall.