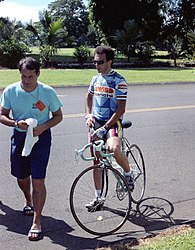 Born in San Donà di Piave (Veneto), he won stages in the Tour de France, the Giro d'Italia, and the Tour de Suisse. Known as Il Capo ("The Boss"), he won Liège–Bastogne–Liège four times, the La Flèche Wallonne three times, and the Tour of Flanders and Giro di Lombardia once. He became Italian national champion in 1983 and 1989, and world champion in 1986. He is the founder of the Adriatica Ionica Race which was run for the first time in 2018.