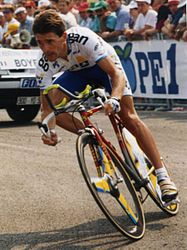 Boyer was born in Choisy-le-Roi. In the 1988 Tour de France, he finished in 5th place in the overall classification - the highest placed French finisher. Boyer won a stage in the 1991 Giro d'Italia.

After his racing career, Boyer worked for television (including Eurosport and L'Equipe) and newspapers. He was manager of the Cofidis team from 2005 until June 2012. In addition he briefly served as president of the AIGCP from 2008 to 2009.