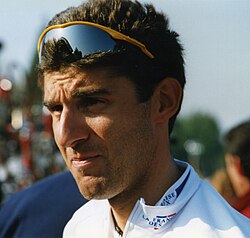 Andrea Peron (born 14 August 1971) is an Italian former professional road bicycle racer. He competed in the team time trial at the 1992 Summer Olympics winning a silver medal. Peron turned professional in 1993, riding for team Gatorade. He is best remembered for leading the sombre peloton across the finish line in the neutralised Stage 16 of the 1995 Tour de France, the day after the death of his team- and roommate Fabio Casartelli in a fall.

He was a strong time trialist, with good results in the Italian championships, as well as a 5th place at the 1996 World Time Trial Championships. From 2002 until his retirement in 2006, he was a domestique on Team CSC. In January 2010 he joined Garmin–Transitions as assistant general manager.