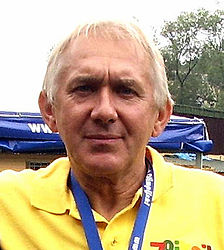 After retiring from competitions he ran a bicycle shop in Gdynia and organized cycling races. He is married to Wiesława Mytnik; they have two daughters, Marcina (born 1976) and Agnieszkę (born 1979).