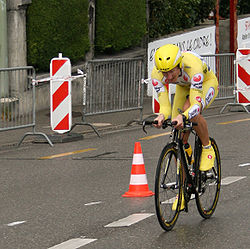 Remmert Wielinga (born 27 April 1978 in Eindhoven) is a Dutch professional road bicycle racer. Wielinga turned professional in 2001 with the De Nardi-Pasta Montegrappa team. In 2003, he moved to Dutch squad Rabobank, where he took early victories with a stage win in the Vuelta a Andalucía and the Trofeo Calvia. In 2006, Wielinga moved to the Quick-Step–Innergetic team, where he took victory in Gran Premio di Chiasso. In 2007, Wielinga moved to Saunier Duval–Prodir, where he stayed for one season. Wielinga retired as a professional after the 2007 season but in 2011 he made a comeback riding for Itera–Katusha, the feeder team of Team Katusha, a UCI ProTeam.